This outlet is based in Aikawa village near Ojiya City and is much more commonly known to all as ‘Choguro’ which was then owned by the lively personality of Yoshio Hiroi.

I first met him after an auction I had attended at Miyakoya. He came over to me with a smile and shook my hand, he then simply said ‘Purachina, subarashi’ – I had bought two lots of superb nissai Purachina at that auction.

He then followed me to the office where I paid for my purchases to be given a ticket to take to one of the staff where I could photograph them before they were packed by the staff for overnight transportation to Takanashi in Narita where they would be rested prior to shipment.

I agreed and climbed into the tiny flatback truck to be whisked away, at very high speeds, which he seemed to accept as the norm. Within five minutes or so I arrived, for the first time, at ‘Yamacho Koi farm’.

In those days he was a struggling Koi farmer with great ambitions for the future and was ably assisted in all his daily duties by his ‘larger than life’ wife who has always produced a very genuine smile on her face. In later years I have seen her don chest waders to assist with the harvests and also carry out the dirtiest tasks possible before going indoors to prepare us all a wonderful supply of food and drinks – she later chastised me saying I was far too thin and needed fattening up!

His outdoor, shallow concrete ponds were opposite the entrance to his small home and it was there and then I witnessed the huge difference between normal Purachina and real Purachina!

The intense shine of brilliant metallic white hit me as I saw hundreds of nissai works of art displayed in the ponds before me. These were much better than the ones I had just purchased and I had to buy some of these beauties for my special customers. It is so hard to explain the ‘shine’ that these Purachina displayed. If I recall correctly I bought 50 nissai from him that first visit and have returned on countless occasions since then.

Hiroi San then looked at his wife next to him who simply smiled with wide-open eyes and nodded as a ‘Yes’.

Hiroi San then looked at me and then put one hand over his eyes and one over his mouth, he then stood up and beckoned me to follow him to his truck. We drove for about half a mile and he parked his truck on the roadside where we got out right next to a small, uncultivated field. He signalled me to follow him across the field right to the boundary where running water could be heard as we approached.

Before us was a natural pond around 8 metres in diameter and no more than a metre deep. It was fed by an underground spring. The pond was surrounded by natural plants and vegetation and the exit from the pond to the ensuing stream below had been fitted with a bamboo grid that prevented anything escaping. Hiroi San cleared away a few leaves and debris from the grid, put his finger over his mouth for silence and beckoned me over.

Please bear in mind that, some 15 minutes earlier, Peter Waddington had seen, with his very own eyes, the finest examples of Purachina to be produced anywhere in the world.

Wrong again Waddy – just have a quick glance into this pond!

I suppose there were some 100 nissai Purachina almost hidden from view by overhanging grasses and plants but the water in the pond was gin clear and sparkling. These nissai had grouped together in a ‘lump’ at one side of the pond right on the bottom.

And all the time I thought I had seen Purachina. The light that reflected from this mass of Koi I cannot begin to describe and so I won’t but my mouth opened wide and I just stared, wondering if the shine really would damage my eyes.

The master studied his children and then called me, for the first time, as Peter San. He then said ‘Nissai Purachina mesu’. (two year female Purachina) and then ‘Tategoi sansai’. I realised that these were his tategoi to be grown to sansai after one more year. Another severe learning-curve for me at the time that I found hard to digest.

He then put his hand in the water and said ‘Mizu – subarashi’ – water superb. He then took my hand and placed it into the water and I found it to be surprisingly warm, Hiroi San just smiled and once again, put a finger over his mouth which, even to a dumbo like me indicated ‘Shh – secret’. He had, in fact, a constant supply of pure heated water for his tategoi which would remain so throughout the coming winter even though he had no indoor heated ponds of his own.

We then returned to his house and finished our tea with a shot of warm scotch for the road. Hiroi San asked me ‘Nagaoka’ to which I replied ‘Ojiya dai-jo-bu’ (Ojiya would be OK where I could get a train back to my hotel) but Hiroi San would have none of this and drove me merrily, once again with complete disregard of speed, in his tiny truck to the entrance of the Grand Hotel.

My first impressions were many – ‘a challenger, a human being, a lover of life, an important teacher’ – the list goes on. I suppose I could write another book just about this legend.

In the following years Hiroi San become more well known as his nick-name of ‘Choguro’ and the sales of his famous Purachina enabled him to rebuild his ancient wooden home with a luxurious new one which I christened ‘Purachina Palace’.

One warm April morning, he gave me rubber boots and took me to his vast area of mud ponds nearby and then showed me in great detail what was involved in the complex process of preparing the water to grow this year’s fry. I still retain the photographs in my hand and his teachings in my memory.

Hiroi San had a full and long life, his advancing years did not reflect in his youthful looks. He sadly passed away a few years ago and his son now runs the farm. 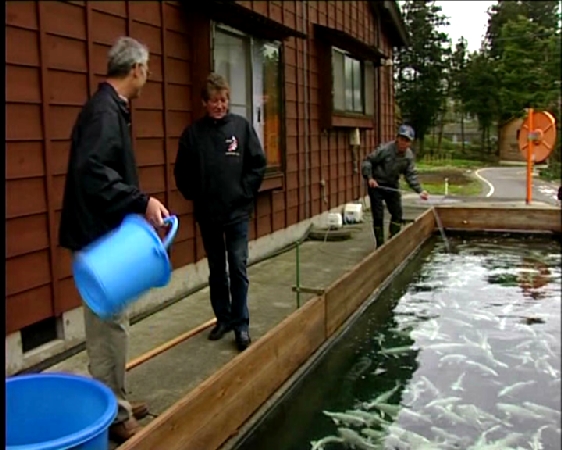