Before I go into detail I will first include some text below from my book ‘Koi Kichi’ which was written from 1986 to 1994 and first published in 1995.

This same text below is even more relevant today but much more importantly to those keeping or wishing to keep Koi in Go-Sanke varieties with high quality skin and also a high quality of pigmentation. In short, Koi that are difficult to find and costly to purchase simply because so few are produced. These are the Koi that are kept not just as pets but ones that can be seen taking important awards at major shows in the all-important Go-Sanke classifications.

These collectors are fortunate in having the necessary funds to be able to build superb ponds and very expensive filtration systems as well as having the ability to purchase and own the very rare and beautiful Koi they collect. 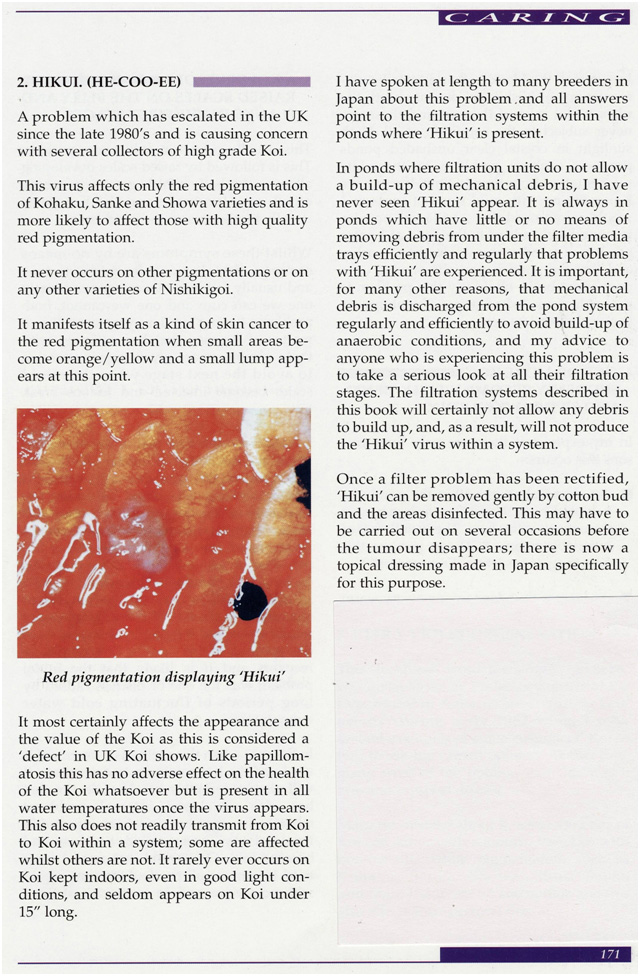 It is not only Hikui that sometimes becomes present but also ‘shimi’ (black freckles on the beni pigmentation) at other times and, more importantly, the deterioration of the overall patterned skin of the Koi which becomes visibly ‘rough’ in appearance almost like fine sandpaper.

All of these problems have, in my experience, been the main contributing factors as to why many high-end collectors finally steer away from Go-Sanke varieties and instead keep metallic and Kawari varieties only or sadly decide to give up the hobby completely.

Once again, it is generally only Go-Sanke (the most inter-bred) that suffer from these problems.

The current parents of these very special Koi have been produced as a result of significant ‘additions’ over the years from the original lines of their forbears. This results in their ability to be able to produce fry with the skin ‘shine’ and the texture of pigmentation desired, to be developed as true show quality specimens in future years. As a result, the skin and pigmentation of these Koi, although of an ‘instantly-evident’ higher quality, is far more delicate and sensitive to that of lesser grade Koi produced in Japan and in other countries around the world. This is the very skin and pigmentation that requires much more attention in water keeping skills and system maintenance than do Koi of a lesser pedigree.

Without labouring the point, these problems can reduce the value of a Koi overnight from thousands to almost zero which relegates the Koi to becoming just another ‘pond filler’.

In all the many conversations I have had with breeders regarding these problems since then, most fingers are still invariably pointed to the shortcomings of the filtration system itself.

(Another interesting point to note is that I have never witnessed these problems in any enthusiast’s ponds that have been running normally for less than two to three years.)

It generally begins to manifest itself very gradually in systems that have been running longer than this. It also tends to become apparent sooner in ponds with high stocking rates to water volumes but, in the end, signs will become apparent on some of the high quality pigmented skin. I have often seen these serious manifestations in many collector’s ponds ranging right through from very poorly-designed systems and all the way through to very expensive systems that produce ‘gin clear’ (I think that’s the precious term that filter manufacturers use today) water and also produce water analysis readings that are nothing short of perfection.

As an aside here, I have never seen these problems with any Koi under three years old.

Why then do these problems never arise with the Koi breeders of Japan who produce this standard of Koi stocks for sale?

How about returning once again to the indoor ponds of these breeders where all drains are discharged on a very strict daily basis?

Once again, these ponds and filter systems are used for only nine months of the year. Immediately after the Koi are taken out into mud ponds for the 90 days of summer the indoor systems are emptied, the filter media is removed and cleaned thoroughly and then left to dry over the summer. All concrete surfaces of the ponds and filters are scrubbed clean either by hand or by pressure washer. It is only prior to the harvests in October that these systems are again filled with water. The media is replaced into the filter chambers and then the water pumps and aeration supplies are switched on again in preparation for the harvests.

In short, these systems are brand new again before any stocks are added and they are only operated for nine months in any given year with only a few minor exceptions I can ever recall and these are mainly for tosai which are never affected with these problems.

The sombre truth of the matter is that most of the high quality breeders have never had to face pond systems that ‘run forever’; however, we Koi keepers all around the world have to operate our systems on a permanent basis.

Is this a wonder as to why I am so obviously fanatical about both mechanical and biological stages of our filtration systems being maintained equally as squeaky-clean as our ponds? Is this also the main reason I am so very obviously ‘anti’ all pressurised or enclosed filtration designs or for that matter, ANY filtration system I cannot see with my own two eyes exactly what is happening at ANY time within all parts of the filter?

I DO NOT THINK SO!

Once again, whilst I realise these problems only visibly affect larger, high quality Go-Sanke; is it not also reasonable to expect that improved filtration systems combined with excellent management can also produce ‘Koi Water’ and bring these benefits not only to high quality Go-Sanke but also lead to better ‘skin shine’, pigmentation and improved water conditions for Koi from far lesser-quality backgrounds? This, in turn, should lead to producing the magical ‘Koi water’ for every Koi enthusiast despite the quality of Koi kept.

Regardless of how ‘house-proud’ we Koi keepers are in maintaining our water parameters and keeping a sharp eye on our filter systems just consider again the facts that surround all of this.

Furthermore, a mature or semi-mature biological stage is nowhere near as ‘delicate and fragile’ as many pundits would have us believe. One only has to witness mature media being transported for a few hours inside a dry plastic bag to ‘start-up’ another system, once this media is placed into the new filter it begins to operate and reproduce almost immediately.

Without labouring this point too much, if we take for example, a small pond of only 3,500 gallons with an actual flow-rate of 1,400 gallons per hour. This equates to 12,264,000 gallons per year being processed mechanically and biologically by a relatively tiny box and this continues year after year after year.

To give some idea of size, 12,254,000 gallons would be a square area of over 165 metres x 165 metres by 2 metres deep!  This is a truly significant task to expect of our tiny box containing only 155 gallons if we do not step in along the way to assist the correct and desired performance. It is hard to begin to imagine the amount of mechanical waste together with dead biomass that has escaped and is being built up constantly in concealed/dead areas within the box – exactly where we do not wish it to do so.

As mentioned earlier, I have always recommended that a ‘constant trickle’ of new water is employed to our ponds at all times in order to stop large quantities of ‘top-up’ water being added immediately after a discharge has been carried out. On the same pond example above of 3,500 gallons this ‘trickle’ would equate to 220 gallons per day or 0.15 gallons per minute only. Whilst I have stated earlier that a standard ERIC should have a mechanical stage discharge once weekly and a mature biological stage discharge once a year, I would now ask you to consider the following possibilities.

As the Japanese breeders discharge all 4” drains to waste daily, namely the bottom drains plus the mechanical stage and the biological stages; we do not need to discharge our bottom drains as they are being discharged automatically into our filters 24/7 by the gravity-fed system. So this leaves us only with our mechanical and biological stages of the filter system to be concerned with. The drains to both of these stages in ERIC are also intentionally and specifically built in 4” bore for maximum discharge speed and efficiency.

If we are discharging water to waste then surely our best choice is to discharge it from the part of the overall system that is collecting the most unwanted matter – namely BOTH stages of our filter. In the above example, this amounts to a total discharge from the entire filter of 154 gallons of water. This is readily replaced by the constant trickle with a further 70 gallons still going down the overflow per day after all of this has been replaced. The system can quickly be running fully and immediately the very moment after the standpipes have been replaced. The trickle will then gradually continue to replace the discharged water to normal level without any need for instant ‘top-ups’.

Whatever time period you decide, your filter will almost always remain to be brand new and I do not really think that the three dreaded skin problems mentioned above will ever be allowed to arise.

Please do consider this very important food for thought.