My Mentors, The Breeders – My very first impressions of them

I have written about these people on many occasions before in the ‘far-distant past’ following the early days of my visits to Japan. I wrote about them initially because I had never come across these names before and I therefore assumed that this also applied to other Koi enthusiasts of the day.

Having seen texts recently written by ‘other discoverers and disciples’ over the last ten years or so about a few of these very same people, I thought it may be interesting to some of you if I recall my own impressions after my very first meetings with them.

However, when I started writing these texts and, from the number of times I have returned to most of these outlets time and time again, – it prompted me to think just how many thousands upon thousands of miles I have travelled throughout Japan in my quests to find Nishikigoi! 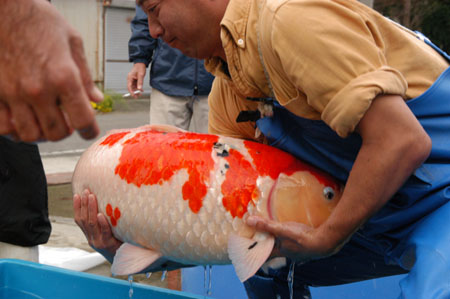 I list these outlets in no order of importance, just from approximate ‘year order’ and memory together with a few hastily-scribbled notes I have kept, and these very first impressions will always remain with me.

There is the odd listing below where I cannot be 100% truthful as to the exact year I made my first visit but most are accurate.

I also must point out that any return visits to any of these outlets, made one year after the initial visit, rarely, if ever, duplicate stock available, quality of stock, prices of stock as witnessed on the first visit – despite very real recollections in my own mind as to ‘must places to visit’.

Many times I have re-visited outlets where Koi were incredible only to find an average selection on my return.

In other instances where the initial visit produced real disappointment, the second visit blew me away!

I cannot begin to recall the times I have been asked as to my ‘top ten’ list of Nishikigoi outlets in Japan. I always reply that my lists can only be finally determined after witnessing the production for the particular year in question.

In short, one must return again and again to all these outlets and have no pre-conceived ideas of what one may find on any return visit.

Once I started writing this page, I soon realised that it would have to be an almost ‘never-ending’ article and so it will have to be added to as and when I have the available time in which to do this.

I must also point out that there are literally dozens and dozens of other Nishikigoi breeders I have visited in all areas of Japan and often after very long and expensive road/rail journies only to find, on my arrival, total and utter disappointment. Some had no Koi at all, others had only Magoi, some had stocks in very bad condition, others simply said ‘Come back next year’ etc. etc.

I have not mentioned these below.