It’s really not good enough writing, advising and lecturing about ‘proper’ Koi ponds unless you have one of your own, and here’s mine.

I designed this system one evening in 1991 and the original design was followed to the letter despite the fact that excavation commenced in mid 1991 but it was not to be until September 1999 when the pond started up for the first time. 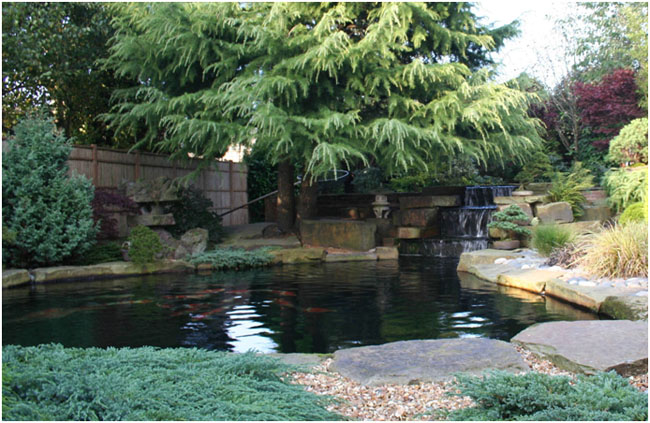 During the ‘90’s I was involved in designing and building other ponds – many large ones in Germany. From 1993 I was busy finishing my first book ‘Koi Kichi’.

Most of the pictures here have been taken in 2009 as it is now. 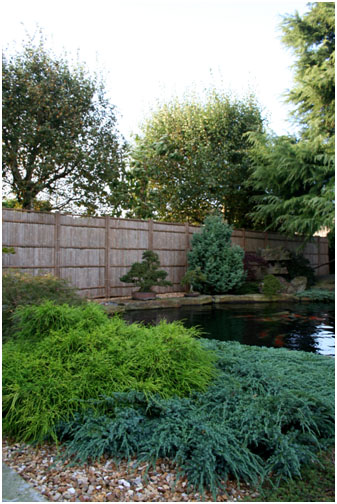 As to the ‘feel’ of the finished pond which was also planned from the outset, I wanted something that resembled a rock pond one can see when a stream falls ever downwards and then, from time to time, there are quiet pools formed in the rock surrounds as it passes through. This is my idea as to how one of these rock pools would look if one stumbled upon it when in the countryside.

The ‘style’ of the pond is somewhere between Japanese and English landscaping although when the work commenced I only left one plant in the garden and that is the large tree you see which guides ones eyes towards it if seeing the effect for the first time. It is more of a centre-piece and it does produce real impact.

I also wished the garden to be as maintenance-free as possible and thankfully this is the case year in and out. 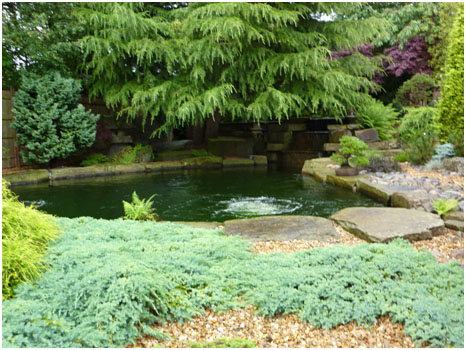 The rock work surrounds to the pond were hand-selected and transported to my home to be re-assembled almost like a giant jigsaw puzzle. Each one had its place around the pond perimeter and was craned over the tree from a farm to the back of my garden. The largest piece weighed 3.5 tons and that lift was ‘hairy’! The tops of the boulders were also important, as I must have safe access to the pond when I need to net Koi, this is why they are almost flat.

One of the most important landscaping requirements was the fact I did not want to see anything other than garden, water and Koi – much less a great big filter system and so it is hidden from view behind the waterfall.

After a few years in which to allow the plants to grow it is now almost undetectable. I must confess the aesthetic aspect is a joy to behold when I’m working in my office and viewing it from my window.

A patio has been built over the filter house as seen here which gives an area for seating and the odd barbecue. It also gives another view of the set-up when looking down into the pond from the top of the waterfall.

Access into the filter housing itself is down the steps and through the door you see here. 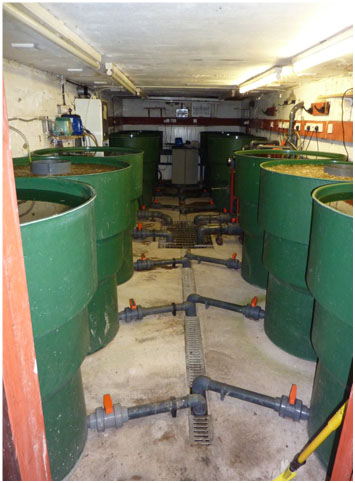 The total volume is 16,500 gallons (75 tons). It is a gravity-fed system with four bottom drains in the pond. Each drain works on the ‘One Drain to One Filter to One Pump’ principle covered earlier and the flow-rate through each ‘bank’ of units is kept at 1,700 gallons per hour. This turns the entire pond over every 2.5 hours. As far as I am aware this was the first pond to ever incorporate this principle although I have designed many more since then. Also in the pond are three surface skimmers that can be brought into use at any time they are required.

This is the filter system as of May 2009 and it has performed very well for the last 10 years with no hiccups at all.

However, it is pointless going into detail about it as all this will be replaced with concrete ERIC designs later this year. Hopefully I will be updating as things progress with further pictures.

One thing will still remain and that is the central discharge sump as my house drains are too high to allow waste water removal by gravity. This sump holds two submersible pumps operated by float switch. These kick-in when overflow water or filter discharge water is emptied into the sump.

This is one of my favourite views of the pond that is taken from the roof of the filter housing. I have often sat here when considering new pond designs for others, it generally produces some inspiration as well as a little relaxation. 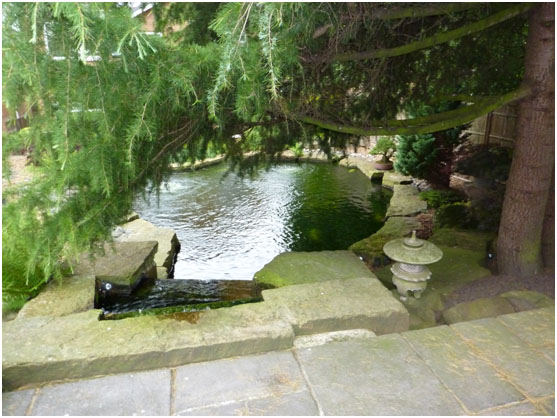 If the truth is known, I’m a little proud of my ‘puddle’, although I always try to forget the costs involved!