I had a full day spare and rather than sit around in Nagaoka, decided to take a taxi to Mushigame village as I had been told that this village had more Koi breeders than you could ‘shake a stick at’ and they were all based next to each other within walking distance. I took a camera and a notebook with me and arrived there on a warm and sunny October day.

I would ask you here to consider that I was alone and on foot with open eyes full of wonderment and expectation – I felt like a modern-day Christopher Columbus taking in all the sights as I strolled on.

I gingerly walked into gardens and looked around only to find that most were just dwelling houses and had no Koi at all. There were also many old concrete tanks right next to the road, some were cracked and empty, others were full of water with trickles of spring water overflowing then into a small exit pipe at water level whilst others contained a few nondescript small Koi.

From time to time I passed elderly ladies, sitting down, who were drying out root vegetables on bamboo mats outside their homes. They eyed me warily as I passed by.

I found many good Koi inside many Koi houses but not a single soul was about to assist me in making a purchase. I sat down on the roadside and tried to draw a map of the village and then put crosses on the map with landmarks and houses where I had found Koi for future reference.

I realised that Nishikigoi were all around me but I could not find them!

She then took my hand and pointed to a house only 25 metres ahead on my right and said ‘Ikarashi San, Nishikigoi’. I bowed and thanked her saying ‘Do-Mo, Su-mee ma-sen’ (thank-you, please excuse me) and proceeded to walk to the house she pointed out.

There was a wide concrete pad leading a short distance down to a dwelling house on the right and an outbuilding on my left which I entered. There before me were two concrete ponds set in the ground which could be accessed by planks of wood that bordered them. I stood on one plank and gazed at the Koi before me. My eyes took in the sights and my brain stored them for future reference, I then started to take photographs to confirm I had not been dreaming. The Koi before me were totally incredible and probably the best I had ever seen, even better than pictures of Koi in Japanese Koi magazines. I must have stood there for a full thirty minutes, cigarette in hand, studying Koi after Koi after Koi. I had seen many, many Koi in Japan by now but not of the quantity and quality of the ones right before me.

I then went to house to find the door open, I put my head inside and called ‘Su-mee ma’sen’ (excuse me) but no reply. I then went to the road and took pictures of the house and then recorded the place on my ‘map’ with a big ‘?’.

I then walked a little further up the road to find Marusada’s home, (covered earlier) – he was at the door and beckoned me inside. His wife brought cans of beer out and some sliced fruit.

Later I showed him my map and asked him the name of the breeder I had just come from. Eventually, after taking him there, I pointed to the house when he told me the name ‘Kazuto Ikarashi’ and then said ‘Subarashi’! – (superb). I was not to meet Kazuto in person for a further three years or so. 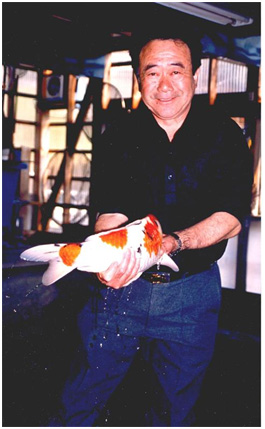 Kazuto Ikarashi, Mushigame. Picture taken in 2001 with a Sanke presented to me to raise funds for the BKKS.