I first came here with Megumi Yoshida who had traded with this farm for many years as had his late father.

In the early 1960’s right through to the mid 1970’s this farm was possibly the largest in Mushigame village when the village was buzzing with Koi dealers and enthusiasts from all parts of Japan.

In those days this farm owned many excellent mud ponds in nearby areas. Matsuda Koi farm gave many other local people, who are now very famous Nishikigoi breeders, the necessary impetus to start out in the business, after they had first witnessed just how much money was being taken at this farm.

By the time I made my first visit the farm was already in decline as many others had overtaken them years before.

I was shown around by an elderly couple who showed me pond after pond of nissai Hikarimuji and Hikarimoyo varietes. The lady had acute eagle-eyes that followed my every movement and even my own eyes should they dwell on a particular Koi for more than a few seconds after which she would have it in a bowl for me immediately! There were dozens of airlines suspended from the roof into the ponds and this made netting a Koi an absolute hoot! In later years, one of my guests named this breeder as ‘Billy Airline’.

I was told several years later that the family were still possibly the wealthiest in the village but that they had all suffered with depressive illnesses that had been sadly inherited from past generations.

In recent years they have sold most of their mud ponds to breeders such as Kazuto and Yagenji. 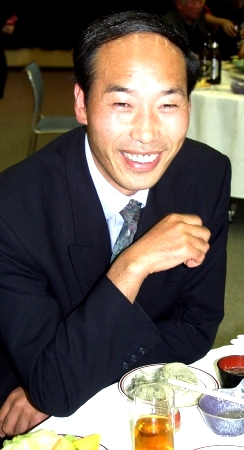