I was taken here by Naoji Takanashi, then office manager for Kamihata Fish Industries Ltd. at their Chiba offices.

Naoji informed me that Isa San was ‘the Koi teacher’ to his employer, namely Mr. Kamihata himself. It was Isa San who first introduced Kamihata San to all the breeders in Yamakoshi during the mid 1960’s and taught him much about Nishikigoi over many visits.

After this, Kamihata returned to his base in Himeji and formed ‘Kyorin Ltd.’, a company which would produce Kamihata’s own brands of Koi food, all sharing the trade name of ‘Hikari’.

Kamihata San later opened a Koi outlet in Himeji and then started to build his own large Koi farm on land he had purchased in Yamaziki.

By the mid 1970’s Isa San became Kamihata’s guide and sole agent for any of their clients wishing to purchase Koi in Yamakoshi. Isa San was also the person who located Koi for Kamaihata to fill any orders of Koi for export customers.

On top of all this, Isa San had many wealthy Japanese customers in many parts of Japan who relied on his Nishikigoi knowledge of both the breeders and the geography of Yamakoshi. These clients also insisted that Isa San would accompany them when making new Koi purchases and commissions were paid to Isa San for his expertise.

Despite all of this information, I never felt comfortable being in the presence of Yoshio Isa. Something about his ‘deadpan eyes’ never completely warmed me towards him.

I must point out here, once again, that, at that time, Peter Waddington was only on the first ladder of his long apprenticeship in Nishikigoi. I had no contacts with any other foreign Koi buyers because there were none. Instead I was here alone and confused in Yamakoshi and very wary of being taken for a ride by strangers.

On one occasion I asked Takanashi San – ‘How do I know which breeder to trust and which breeder not to trust?’ Takanashi replied by simply saying – ‘If the person has an ‘honest face’ then trust him, if this is not the case, then do not trust him’.

In my eyes, Isa San did not have an honest face!

He showed us around his farm just a short walk away. He had mud ponds, partially under-cover concrete ponds and other open concrete ponds containing Koi for sale. He attempted to sell me some of his stocks but I made random excuses that I would return when I had more time at my disposal.

I have yet to buy one single Koi from this man.

The story of Isa will continue later on another page and re-opens during 1984. 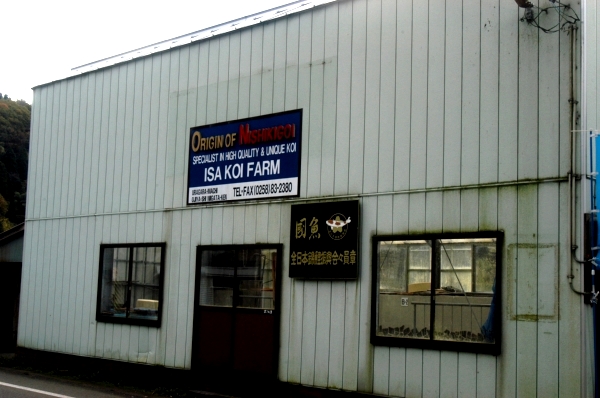