If we draw a straight line starting in Yamakoshi and heading south east it would come to Ojiya City, by continuing the line it would then arrive at the villages of both Wakatochi and then Kitayama before heading further south towards Tokyo. The distance from the northernmost point in Yamakoshi to Ojiya is roughly the same as the distance from Ojiya to Wakatochi.

This was the first time I had visited these villages. The drive there showed a different kind of scenery to Yamakoshi in that there were far more rice fields and many racing streams constantly carving out deep chasms in the steep, rock faced valleys way below us.

Shoichi Hosokai is based at the very top of Wakatochi village which is entered on the right hand side of the main road and landmarked by two tall stone columns. He continues to hold an important position in the breeders association in the Yamakoshi areas.

My first visit produced Koi in just about every variety and size. I purchased some superb Shusui and one memorable sansai Purachina together with Asagi and unusual Kawarimono varieties such as Kumonryu, Hajiro and Matsukawabake.

After completing my purchases we were invited in his home where he showed my pictures of his past champion Koi and plied me with small bottles of an ‘energy drink’ that he drank daily.

My first impressions here were of ‘distant but important’. 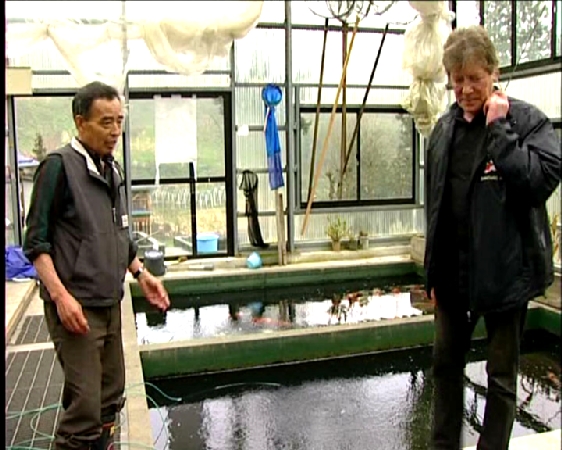