The day when the Koi have to be transported from their present pond and be taken to their brand new posh pond. 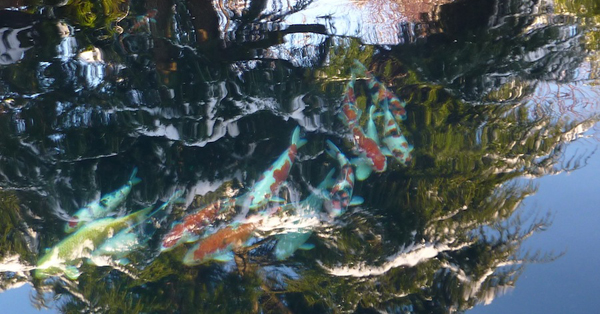 The water temperature is low at 5C but does make for safer transportation without much risk of travel damage as the Koi are caught and packed.

Koi were caught in sets of three and transported in individual double-strength bags. They were carried to the truck for oxygen inflation and then sealed inside cardboard Koi cartons. 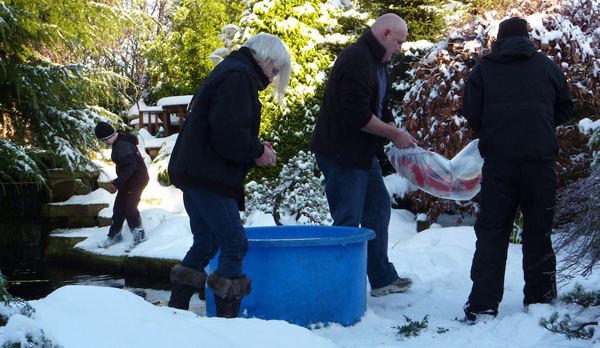 This shows Matt & Paul carrying a larger Koi to the truck for packing. There were sixteen Koi in total to be transported. 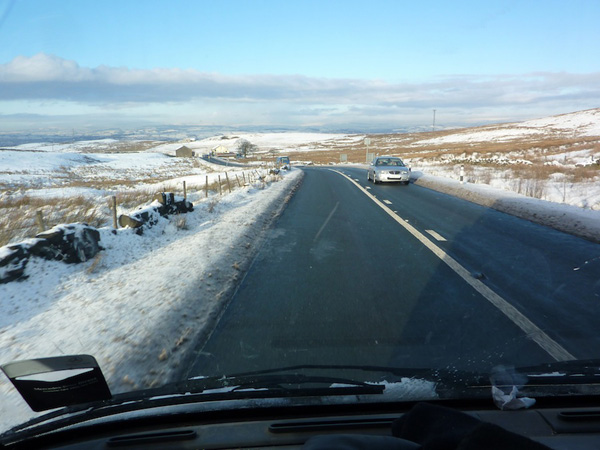 The unspoiled beauty of Lancashire’s ski slopes on a typical winter’s day. The mast on the right will be operational in 2019 when television comes to the area for the first time. This is taken between the world-famous black pudding centre of Rawtenstall (just north of Ramsbottom and its ‘questionable’ nightlife) heading towards Darwen and a few other similar instantly forgettable places. 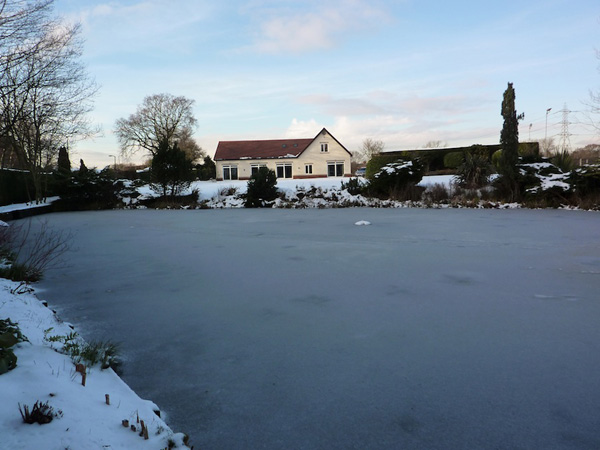 Disaster! On arrival we found the pond to be frozen over completely with no chance of breaking the ice. This is despite the THREE, yes THREE 300w aquarium heaters placed strategically around the pond – these are to be sent back to the mail order supplier as ‘unfit for use’ immediately. Even the powerhouse that filters the pond (Big Bad Bead Boy Blaster MK2) can be seen capped with snow in the centre of the pond and appears to have also given up the ghost – thankfully it’s still covered by warranty! 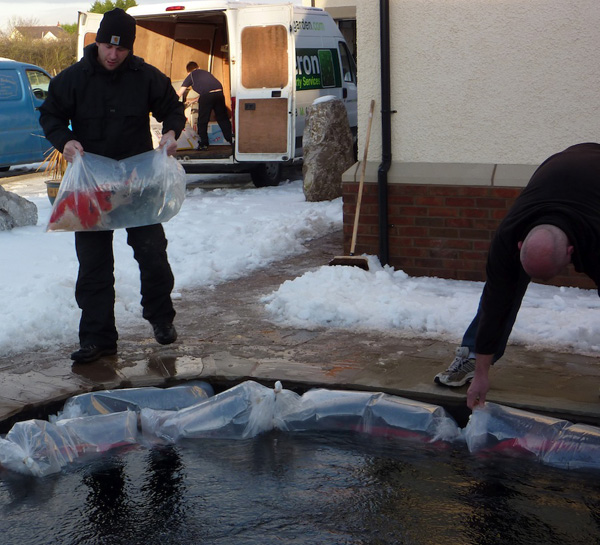 We found a smaller pond nearby and checked the water temperature to find it was 8.5C and so we decided to float the bags in here and wait for equalisation. 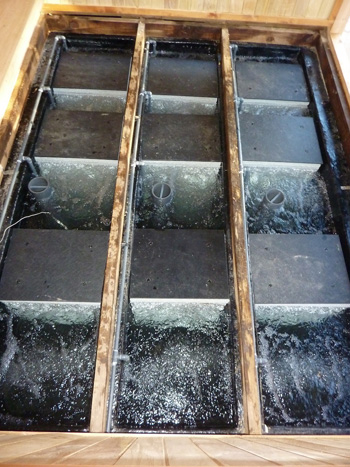 Thankfully the pond had a filter system of sorts, the owner had been led to believe that this was the latest thing known to him as ERIC (which sounded a very stupid name to me?) – I knew exactly what it was and he’d been cheated but I kept my mouth shut. This is a typical standard ‘Longthrow Raceway System’ that’s been used by leading Koi collectors in the USA since the days of the American Civil War! I find it hard to believe that some folks are so gullible today! 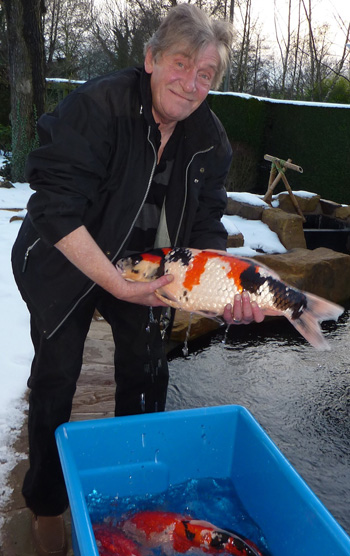 I’ve always loved Chags – this one’s got sparkly scales as well! The owners say he’s going to grow this one on but he’s not yet decided exactly what he’s going to grow it ‘on’ – will keep you posted after he’s made his mind up – decisions, decisions! 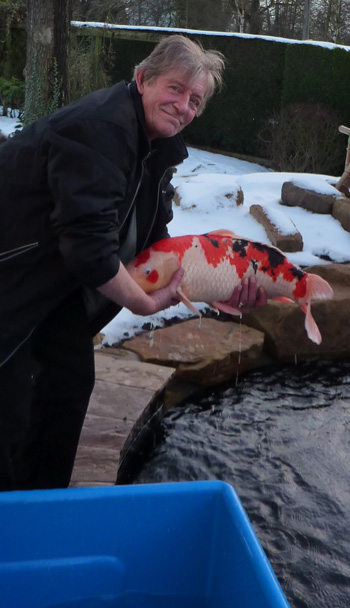 Here’s another and this one’s even bigger. It’s quite amazing how tame they get – especially when they’re hungry! 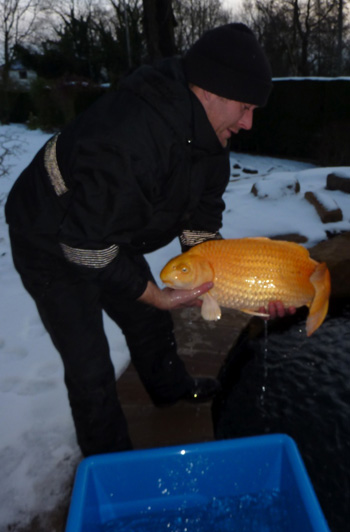 Matt says this is a ‘Yamabuki’ – looks a bit boring and ordinary to me. Mind you, it looks well in the pond; the owner says he caught it on the River Ribble using float-fished Koi pellets that only contain worm meal rather than fishmeal. He say’s it’s all the latest rage. 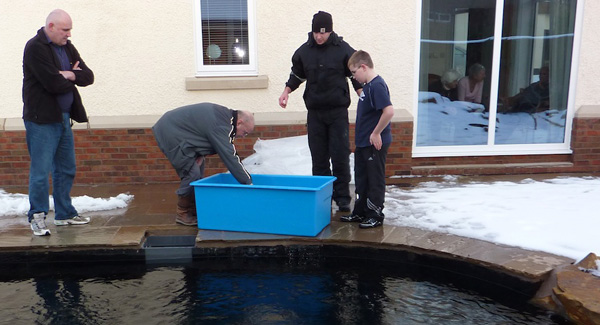 This shows the owner explaining to us all exactly what Fukurin is on his Koi. I found it all rather distasteful, especially with young Jordan standing so close! 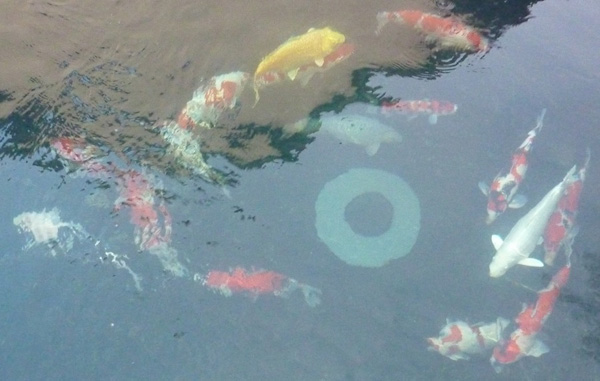 There is more to do after the filters have had a chance to operate to some degree. Each river will have to be checked for flow rate and adjustments made where necessary. I plan to do this early in the New Year.

Please also let me take this opportunity of wishing all of you a wonderful new year and sincere thanks for visiting my website.