Matt Cameron decided to finally return from his seven-week installation abroad on the 14th. November and started to fit the pumps and other items into the equipment housing on the 16th. November. 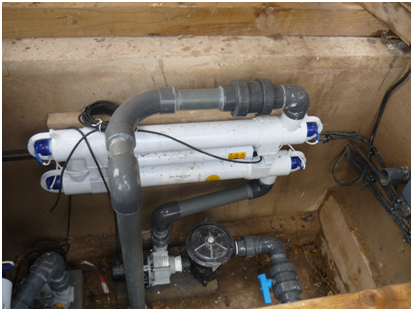 This shows one of the two 110W U/V units in place and two of the filter pumps.

There will be other pictures of this as the installation progresses.

As you may have heard on the world news channels, it has not exactly been the driest of Novembers in the UK this year!

The making of the brush boxes and filter blocks is well underway and these will be added after the rivers have been cleaned in preparation for placement.

The landscapers have also been applying some very careful thought as to the finish of the area between pond and tea house/summerhouse. I can see the finished effect to be absolutely beautiful if this kind of attention to detail continues around the entire system. 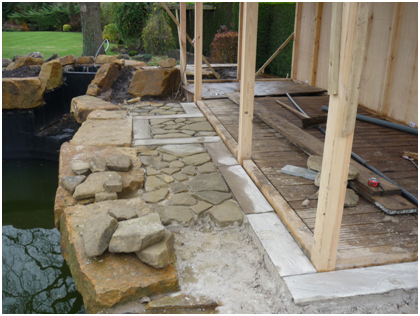 Things should move forward fairly quickly from now on as the new house will be ready for occupation in mid December.

Being both old-fashioned and old at the same time – I place much importance on the final landscaping effect of the overall system.

Leave what goes on below the water to me because that’s my job, but bring on the talents of good landscapers when final finish is concerned.

All I wish to see on completion is water and Koi ‘full stop’. If I see any trace of a single pipe or fitting, an electricity cable, an airline or even a glimpse of a filter box, I promise you, I will deal most severely with those responsible – I have been even known, on rare occasions, to sulk!

This shows Matt Cameron continuing the installation of pipelines and equipment in the housing at the end of the three rivers. On completion there will be three water pumps and four, large output air pumps driving the aerated drains and the three rivers. The three small orange valves to the left of the housing will be connected to the twelve membrane diffusers. 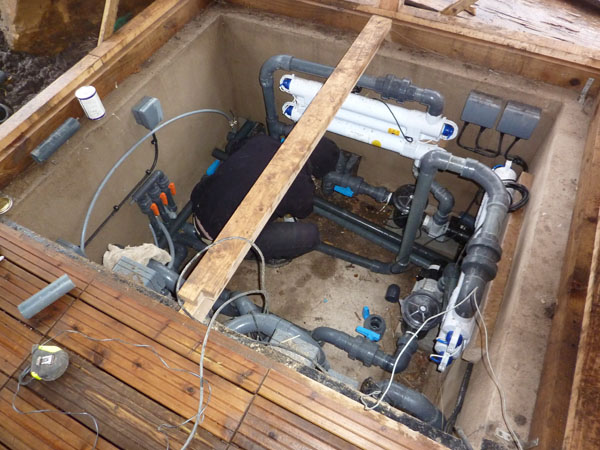 The flat, random and formal stone landscape detail to finish the area between the pond and teahouse has now been completed by ‘The Guy with The Eye’. Personally I think this touch adds so much visual attention to detail and compliments what will become the overall picture when the project reaches completion – much thought and workmanship has gone into this area, truly superb! 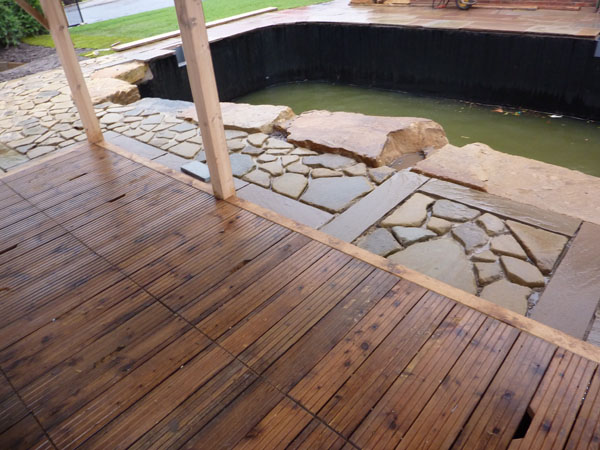 The roof of the teahouse is well underway as the cedar shingles are being positioned and nailed despite the inclement weather. As a note, for the past 30 days, there has not been a single day without rain. More details of the teahouse will be shown on completion. 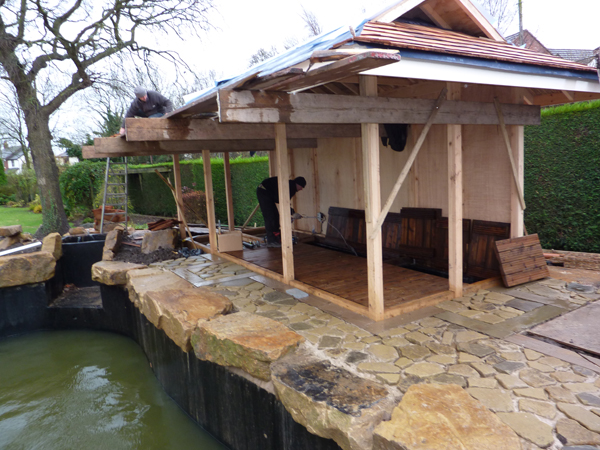 As mentioned earlier, the concrete boxes require cleaning of general building debris before the internal parts can be added. 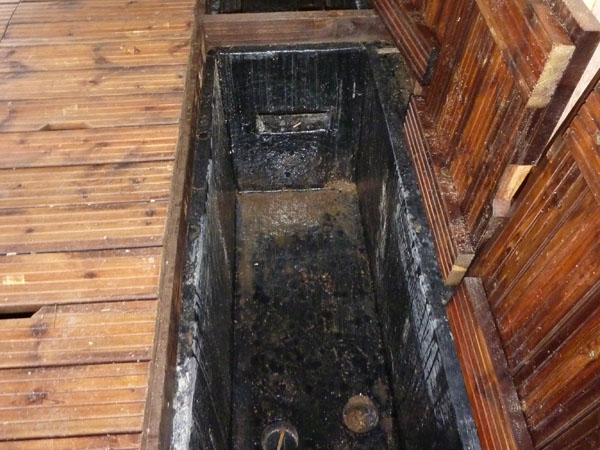 The cartridge blocks and brush boxes have been tailored to the finished dimensions of the three rivers. 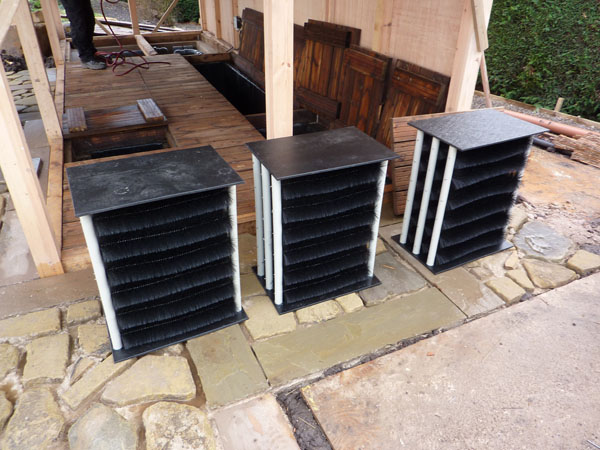 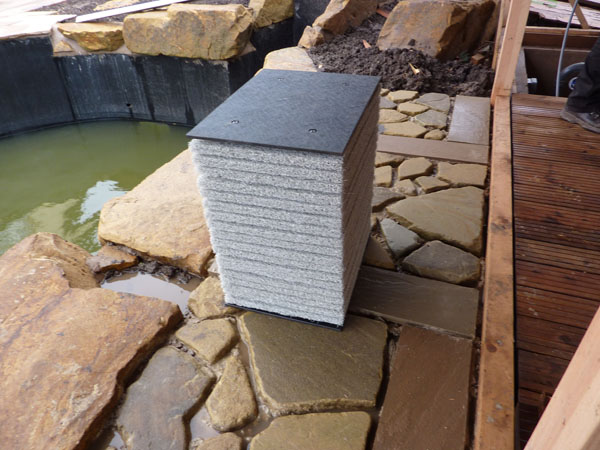 The internal parts are lowered into position and this shows all cartridge blocks in place. The next job is to fix the other internal DIY parts with screws and install the entire aeration system. 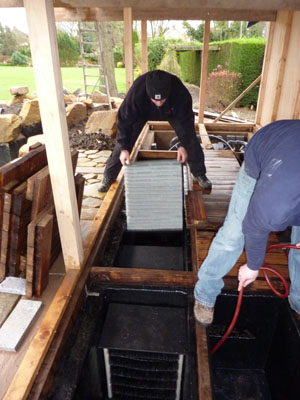 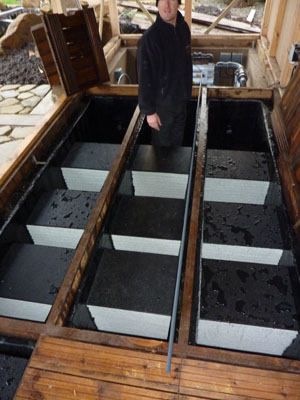 As the pond nears completion and more pictures will follow very soon it is best I point out the simplicity of this design once more.

As far as filtration and water ‘quality’ is concerned that’s it!

There are no other gizmos employed elsewhere on the system.

U/V units, surface skimmers, waterfalls and heating systems which have nothing to do with water filtration or water quality are on separate lines. These can be used when they are required.

Again, there will be a constant trickle of mains tap water to the system which is there to compensate for any water discharged by servicing.

This shows the view from the side of the garden where the raised ground area near the waterfall needs planting and landscaping. The teahouse roof has been almost finished with just another coat of paint to detail on some inner walls.

This is a more detailed shot of the teahouse internal structure. 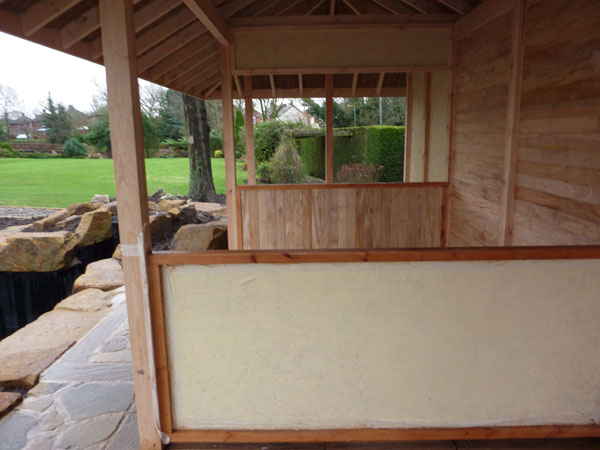 The equipment housing installation is completed by Matt Cameron and shows all items used. The chamber has a 2” drain fitted into the base to allow any ground water to be taken away to the sewer. Again, yet another rainy day was present. 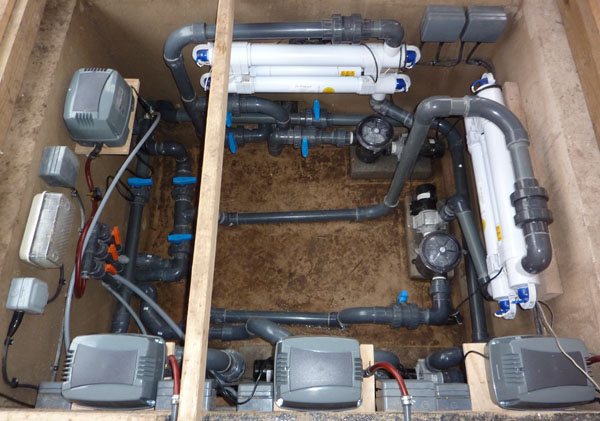 Flow-meter fitted to mains water supply line in order to get exact water volume when the system is full to running level. 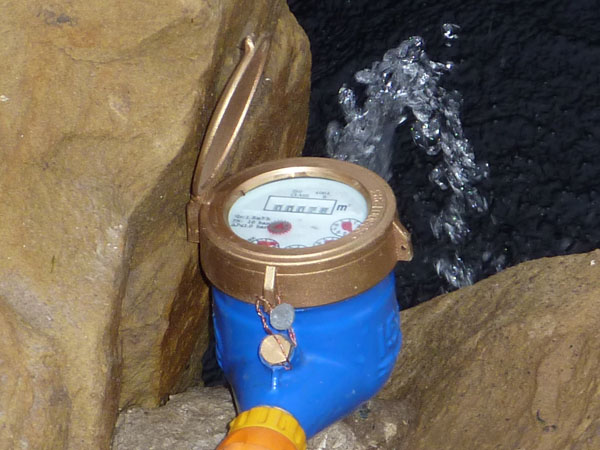 This shows the base of the pond being filled after all surfaces of the pond had been cleaned thoroughly. Estimated time to fill the system is around two days and nights. Things should start to move at some speed from here in. 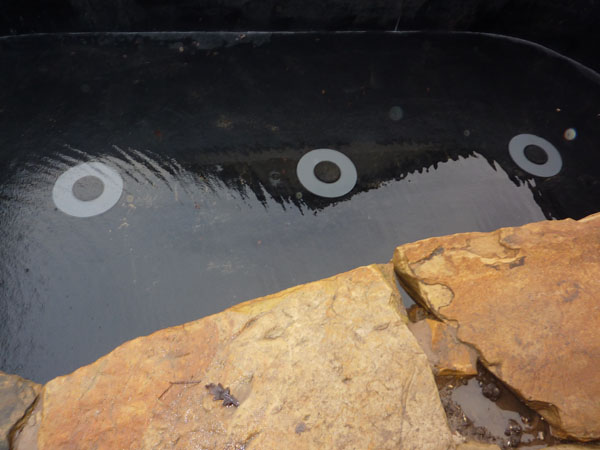