This shows the pond nearing final water level with only a further 4” (10cms.) to go. 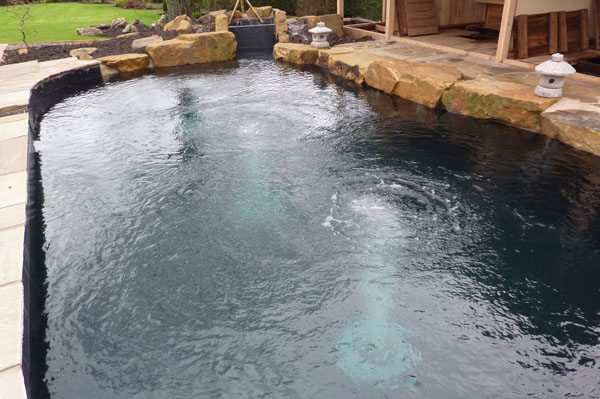 Before the filtration units were filled, the drain lines were flushed to waste beforehand to remove any debris that may have built up in the lines during construction. Despite the reduced water level this allowed us to test all the equipment with the exception of the surface skimmers and the aeration can be seen coming from the tops of the bottom drains.

No water leaks were present in the filter housing and visible return currents from the filter units can be readily detected when aeration is switched off.

Although final volume cannot be determined exactly until the desired water level has been reached, I estimate some 17,000 gallons (77 tons) water will be the final figure.

Now the pond is running to operating level, it is now possible to start making necessary adjustments that will be required. As expected, there would be variations in flow between all three rivers and this can be easily seen with this photograph. 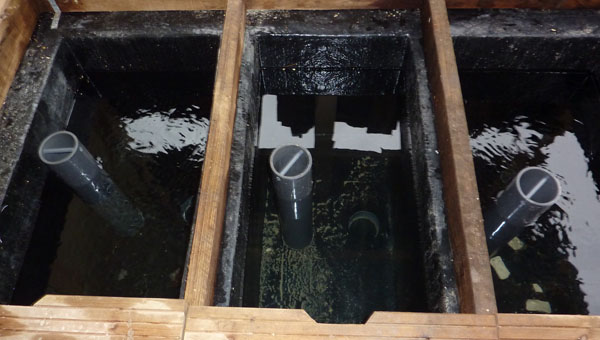 Again, more water is required to reach final running level but this shows what is happening in the mechanical stages. The left-hand river shows good water disturbance by the incoming supply from the bottom drain, the right hand river shows a slight reduction and the centre one shows little visible movement. It is vital we get around 1,800 gallons (8,000 litres) per hour through each river.

The pumps in question are identical USA-made Sequence units claimed to produce the flow required and the variations seen are directly due to length of 2” bore return lines, fittings used in the lines and the pond water depth as they enter the pond. Mere claims by the manufacturer or visible detection and estimations made by the human eye regarding the actual flow rates are not recommended and these will be addressed and rectified as a priority in the next few days. 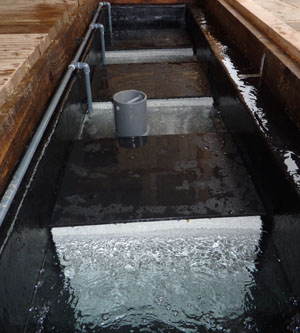 The picture on the left shows a view of the biological stage of one river as the water flows towards the viewer and shows three of the four points of turbulence produced by the membrane diffusers. More detailed shots will be taken once final level has been reached and the standpipes have been perforated at running level to provide perfect system overflows.

The under floor heating system’s thermostat has been set to 10C and has taken the ambient from 6C to 7.5C in only two hours. It is now important to finish the actual system operation to perfection, as all Koi are scheduled to be introduced on 23rd. December.

For those readers not aware and in view of emails received, the filtration system on this pond is by way of ERIC units. More information can be obtained by going to the home page and clicking on the ERIC logo.

Full running operation of this filter system will be detailed on this page after the Koi have been introduced.

Before we continue, just a reminder for the many of those enthusiasts around the world who have been following this page all the way from the beginning.

The system was designed in January 2009, long before ready-made ERIC units had been considered and so this filtration system has been built in concrete. The actual performance of the system will be no better and no worse than the ready-made units. In short, they are exactly the same.

However, the concrete version required having the underground pipelines fitted before the prime filter base was cast as shown here. 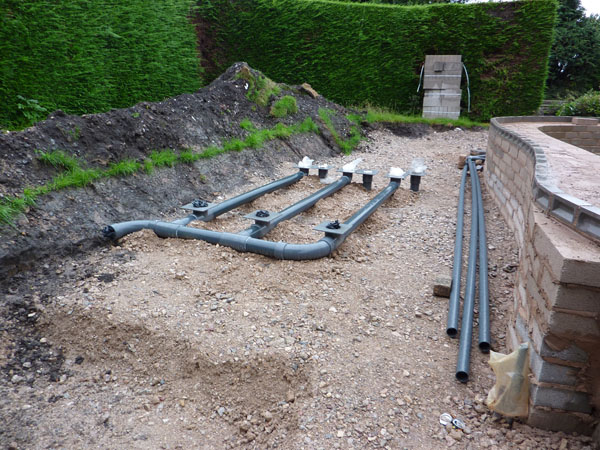 The labour and materials used have obviously to be considered here.

Next, the structure had to be built in concrete blocks and then rendered. After this the finished rivers had to be waterproofed. In this example glass fibre laminating was employed as can be seen here. 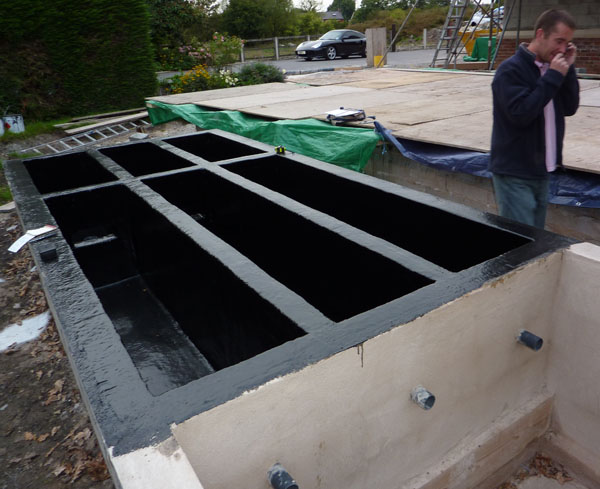 All these costs must also be accounted for.

Next is the ‘Ground Area’ taken up by these filter units when formed in concrete. (The equipment housing required is another structure completely and would have been required had any other choice of filtration been opted for.)

As to the ‘Volume Area’ (soil removed in an in-ground installation) taken up by these units it is minimal even in concrete if compared to other any other units opted for with this volume of water to be processed.

This shows the ground area taken up by the system as is and also what the area would have been if taken up by three ERIC FOUR ready-made units. (It must be pointed out that the ERICMAT blocks have also reduced the length after replacing the standard filter mat cartridges originally planned.) 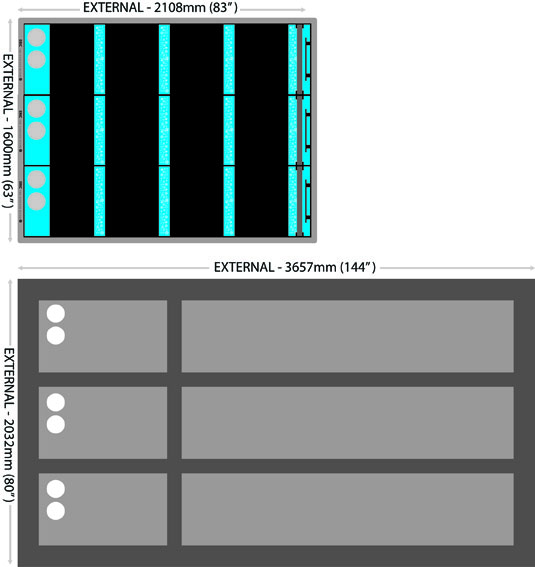 The cost savings in installation and build of concrete units vs. rapid placing of ready-made units is significant in favour of the ready-made units. Add to this reduced excavation, soil removal and space taken up and I’ll leave the reader to form his/her own opinions.