Most of the Koi for sale were displayed in two unfiltered, concrete ponds right next to the main road running through the village.

There was one very narrow, plastic-clad wooden Koi house to the left of the wooden dwelling house and a larger indoor Koi house to the right. On later visits I realised that no water heating methods were employed. The rear of the property stood on a narrow and thin concrete pad above the wide, racing stream some four metres directly below. This stream runs for a further 500 metres or so before discharging into the nearby Shinano River.
The nick-name ‘Torazo’ was given after the early Sanke bloodline was developed and ‘resembled a Tiger’. The late and very jovial Hiroshi Kawakami owned and ran the farm at the time where I soon purchased my very first Koi in the Yamakoshi area.

There were many Sanke for sale in large sizes together with some Kohaku and I was taken-aback after witnessing how large they appeared to be at the time. (Perhaps a few exceeded 55cms.)

Inside the Koi house on the right were a wider range of varieties – Go-Sanke plus Shiro Bekko; Kujaku; Ai-Goromo and some Kawari varieties. On later visits I met his son Tsuyoshi who was almost finished at high school and more interested in rock music rather than Koi, he usually hid himself away in his own room on the first floor of the house and I recall giving him a cassette tape (remember them?) of Dire Straits which I begged him to listen to carefully.

My first impressions on that sunny day were of ‘calm happiness’. 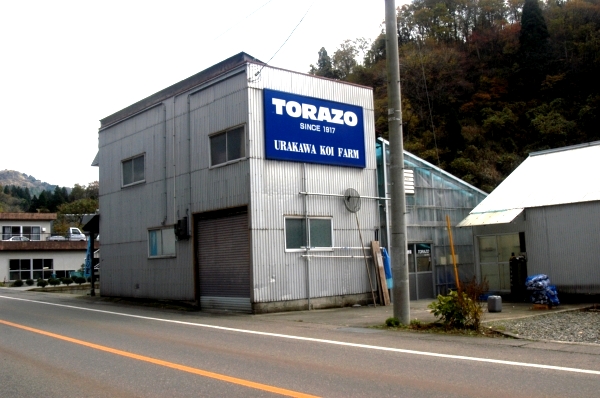