Again in Uragara village and only a few metres walk from Torazo on the opposite side of the road.

This was a huge and VERY, VERY lush outlet indeed.

Soon after our arrival, outside caterers arrived with trays of very carefully-cut ‘English Sandwiches’ and assorted cream cakes which were individually wrapped and looked very expensive. Coffee, Cola and beer soon followed which were politely delivered by the owners, each with smiles that seemed a little too contrived for my liking.

The main indoor ponds were in a large steel-framed and glass-covered Koi house which boasted some ten filtered concrete ponds. The outside concrete ponds seemed to stretch forever as we crossed an ornate bridge leading to the dwelling house. This large traditional luxury Japanese house is truly beautiful and a far cry from the wooden homes seen earlier at other outlets.

Soon afterwards our interpreter explained that the entire facility had been built two years earlier from monies paid out by the Japan Rail company who purchased land belonging to Mr. Miya for a future Shinkansen (bullet train) line planned for some years later. There were thousands of Koi for sale here in many sizes and varieties.

My first impressions were of ‘hidden danger’ – they still remain to be so today! 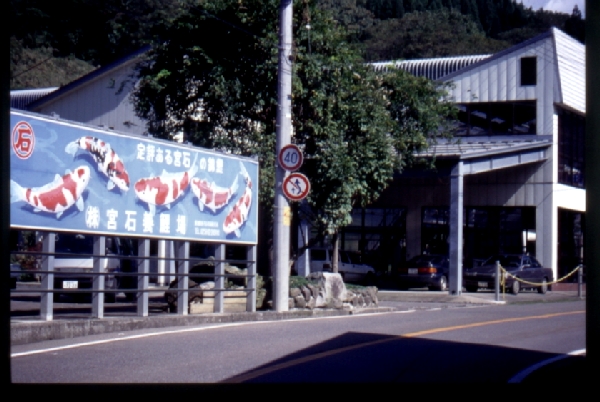