The Paramount Importance of ‘Aeration’

I cannot emphasise just how important the addition of very heavy aeration is to a modern-day Koi pond filtration system where it should be added both to the pond itself and to the biological filtration stages.

The more aeration added to the biological stage, the better it performs in its duty and it is impossible to provide too much, even in periods of cool water when natural dissolved oxygen content reaches the highest possible normal levels.

I must confess that, back in 1985 when I first imported the high output units to the UK, I had no real idea as to just how important supplementary aeration is to all vastly improve our real understanding of Koi pond filtration. 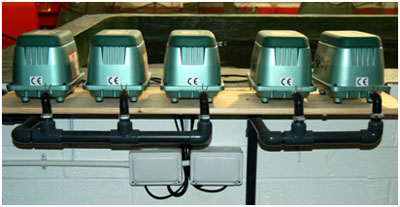 This is an installation of five ‘HiBlow 80’ units providing 400 litres per minute of heavy aeration to both pond and filters on a Koi pond system of 8,400 UK gallons.

Thankfully over the passing years, it has become more and more apparent to me, to be probably the single most important aspect of a ‘proper’ system.

I hasten to add, I have no financial interests in the purchase and sale of air pumps. The Takatsuke Company in Japan, under the trade name of ‘HiBlow’, made the ones I first introduced to the UK in and these are the units I have had the most experience with.

These units were first introduced into Japan for medical laboratory applications and have had superb results in preventing coagulation of human blood during storage and preparation for transfusion.

The numbers of 40, 80 and 120 seen after the model name usually refer to the output of air in litres per minute. In some instances this also relates to the electrical wattage used during operation.

Whilst most of these units are weatherproof, they are not waterproof. Make sure they are installed above pond water level in order to prevent ‘back-siphoning’ of the air supply followed by resulting water ingress in the event of a power failure.

If required, one can purchase non-return valves specially manufactured for air supply lines which will allow them to be sited outside the pond but below final water level.

I also hear from time to time of ‘HiBlow 40’ units still providing constant service even after 22 years of constant and un-interrupted service!

You can see in the previous photograph that the standard ½” outlets from the pump have been increased to 1” rigid lines. Apart from giving more performance by way of reduced friction-loss it also gives much less wear and tear on the pump diaphragms themselves. 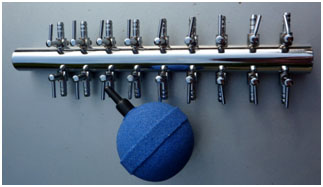 Words of advice here, some units are supplied with ‘gang valves’ as part of the package. They are made for use in aquarium set-ups and a re connected by standard aquarium airline to ball air stones as seen in the picture. These items are of no real use for pond applications – even those of small volumes. As mentioned, these accessories only serve to restrict performance and, at best, produce a few bubbles.

In order to produce far more effective aeration to our ponds and filters please consider equipment that is supplied with the same bore outlet connections as that of the air pump.

These items are readily available from many good Koi outlets and large bore airline tube can also be purchased to connect these together for your particular requirements. 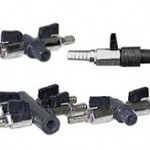 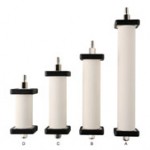 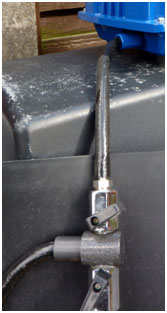 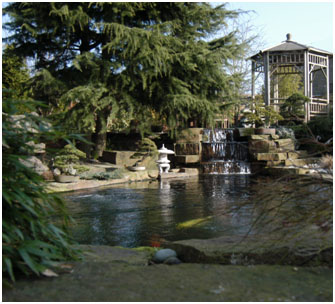 In order to provide vital increased dissolved oxygen content to the water, supplementary aeration is provided to my own pond by means of the waterfall and four aerated diffuser drains as seen here.

The biological media surfaces in the filter housing are also supplied with very heavy aeration. 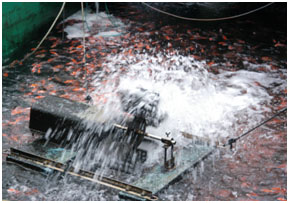 This paddle aeration system is widely used by the Japanese breeders for their smaller Koi stocks that are kept in heated indoor ponds over the winter period and fed around four times a day.

On many occasions in the past I have made several water tests on both Japanese mud ponds and the breeder’s indoor systems despite the fact that I have never once seen a Japanese breeder make checks on any aspect of water quality. In both mud ponds and indoor systems (even when fully loaded with huge stocks after an autumn harvest) and all I have found is very minute ammonia & nitrite readings and an equally low nitrate reading – far lower than we are used to in the UK. Upon asking several breeders as to why they always use heavy aeration in their indoor ponds they simply reply to say –

‘It is far better for the water and the Koi’. I have always felt that increased dissolved oxygen content significantly reduces nitrAte build-up in a system.

It is also worth bearing in mind that, as water temperatures rise in the summer months, the dissolved oxygen content of the water decreases accordingly. It is therefore always wise to have some extra aeration to hand.

Today, there are many other brands of air pump available which are very similar in appearance to the original ‘HiBlow’. Brands such as ‘Secoh’ and ‘Medo’ spring to mind here but I do not know where they are manufactured nor do I know how they perform over periods of time.

It is perhaps best to discuss the pro’s and con’s of each make with fellow Koi enthusiasts and Koi dealers as to which brand represents good value together with proven, lasting performance.