As to the Koi foods manufactured over here in the UK and bearing in mind the current economic climate facing us now, I would think it more than possible for a section of a Koi society or even an entire society to have Koi foods, to a given recipe, made up very, very economically as there are many animal feed manufacturers out there now frantically looking for new business.

In instances such as this, the value is only in the food itself and packaging can be in large paper sacks bought completely fresh from the maker and divided between those purchasing it and kept in their own storage containers. However, in order to do this, one must first have a recipe!

One particular brand of ‘specialist Koi food’ produced in the UK is marketed by a company who came onto the Koi scene by way of simply re-packaging readily-available chemicals and other items into pretty packages for display shelves at ridiculous prices. I often wonder how this company has come up with the necessary expertise in formulating recipes for specialist Koi foods (also in fancy packages).

Another ‘specialist Koi food’ is produced in the UK by a company who make plastic filter systems and sell pipe work and fittings as their main business. The genius behind this states proudly in the colourful advertising that carp do not eat fish meal in nature and so this ingredient is not included in their recipes. If one has witnessed the amount of freshwater shrimps; un-hatched carp eggs and their own fry that carp feed upon ravenously then this all boils down to ‘fish meal’ whichever way one looks at it. 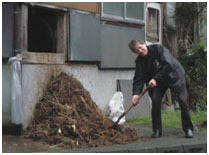 One also wonders if these companies and the many other ‘specialist Koi food’ companies on the market today actually keep Koi? It would be a help though.

I feel the picture is required once again!

Another point to consider seriously is that of UK Koi breeders who are producing some very nice Koi today with growth and pigment not dissimilar to the Japanese breeders. As an example, how about Maurice Cox of Koi UK Ltd. who must have a significant food bill every year for the stocks he produces?

Does Maurice buy pretty packs of Koi food by the ton from a UK ‘specialist Koi food’ producer? No, he does not; instead he uses his very own recipe that he has made up in Holland especially for his own stocks. If one witnesses the standard of Koi he produces right from the eggs, isn’t it just possible he may well be onto a good recipe that has a proven track record? In view of this is it not worthwhile to contact Maurice in order to purchase some of his food? I saw Maurice last at ‘Koi 2009’, the proof as to how good his food is can be seen in the health and pigmentation of his production – all you have to do is look at them, if it’s actual proof you need, why look any further?

And what of the Japanese Koi breeders themselves? Will we find half-empty colourful packs of Hikari food scattered around their indoor Koi houses? 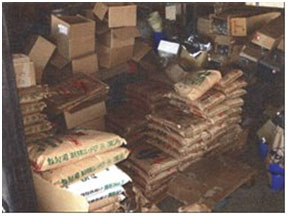 Sadly no, this is a picture of a Koi food supplier’s store in Iwamagi. The owner delivers this basic recipe of Koi food to the breeders in the mountainsides. It is packaged in brown paper sacks containing 20 kilos of pellets in assorted sizes and is fed to all Koi produced irrespective of their quality. All Koi shipped from Japan to the UK have been raised on this diet since birth.

So, up to now, what would I recommend as the best available foods to feed our Koi in 2009?

In no particular order how about:-

There is another avenue worthwhile considering also.

Some years ago, whilst assisting at the Holland Koi show in benching duties, I was introduced to a guy who had a small stand there selling his own range of Koi foods. The guy who begged me to meet him was an acquaintance of some years so I agreed, thinking at the time ‘Oh no, not another Koi food manufacturer’! I had an idea that I would shake his hand; smile; look impressed, make a few pleasantries and depart after five minutes or so. However, that was not to be, I think we talked for over an hour on the subject of Koi foods and, after leaving him, my head was throbbing with new and refreshing information. Mike van Zijl of ‘Nedkoi’ is a ‘Koi Food Man’, that is his sole interest in the Koi keeping hobby, he is also determined to make the very best Koi food there is anywhere on this planet.

He speaks with self-confidence and real conviction he also has a background of experience in his subject with which to back up his statements. His enthusiasm on his subject overflows as one listens to him but he is far from being ‘pushy’ in any way, yet nothing is too much for him if further explanations are required. Mike was more interested in my own views of the subject than attempting to sell me anything, although I did leave armed with his food samples and leaflets to study later. 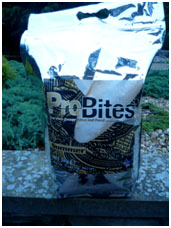 At the time I first met Mike, he had a truly revolutionary idea in that of 100% fresh and deep-frozen Koi food recipes despite the problems involved in transportation to, and storage at, retail outlets and then the storage problems for the end users. The food would have to be de-frosted before final use and, despite my many protestations, Mike was adamant as his only desire was to be able to provide the very best food for the Koi and, in doing so, get return sales and more customers by honest and open word of mouth.

Once again, he has no other Koi items at all for sale; instead he is a specialist in Koi foods rather than being ‘A Jack of All Trades’. Since then, Duncan Griffiths in the UK has openly attempted to promote and sell Mike’s ‘ProBites’ food recipes for some time now and, in doing so, has convinced several enthusiasts as to their real value. Alas, Mike’s Koi foods in the UK are still almost a secret whilst they have great success on the Continent with enthusiasts who have changed over from the ‘Saki Hikari’ range never to return. He has had for some years now a new range of non-frozen foods but can still supply the original frozen ones if required. Mike has a website full of extremely detailed information on all of his recipes and pack sizes.

In my own opinion and from experiences gained over many years on this subject we now have four real and valuable choices of specialist Koi foods available as of right now in 2009. I could go into far greater detail as to why I could never possibly recommend the other brands available and I will resist for the moment. However, if you are considering any of the other brands, go for the cheapest ones offered – at the end of the day they are all very much of a muchness!

I must point out here that I have no financial interests with any of the Koi foods or companies mentioned below but these would be my own personal shortlist of foods I would purchase for my own Koi. As to prices – I have no idea at all; all that concerns me is value for money and the benefits given to my own Koi.

Pages: 1 2 3
This entry was posted in The Keeping. Bookmark the permalink.