The correct name today for ‘Koi Carp’ as many generally refer to them is ‘NISHIKIGOI’ (nish-key-goy) – taken from the Japanese term that translates as ‘brocaded carp’. 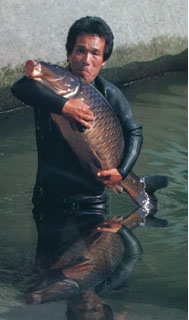 The Japanese words ‘Koi’ or ‘Goi’ simply translate as ‘Carp’. The real origin of these coloured creatures was, in truth, more of an accident than by any real intentions and they are truly ‘man-made’ – albeit originating from the ancient, wild black carp known in Japan as ‘Magoi’, however, Magoi are not a native species to Japan as many still believe.

Magoi – (Latin name ‘Cyprinus Carpio’) were originally only indigenous to the temperate climate areas surrounding the Caspian Sea and were, in later years, introduced to many other parts of the world for valuable food purposes via the Crusaders and the monks. They are ‘temperate water’ species as opposed to being a true ‘cold water’ species.

It is said that Magoi were introduced in the mid 1700’s into Niigata Prefecture by the wealthy landowners of Nijimura, (twenty villages) – a mountainous area lying due north west of a straight line between Nagaoka and Ojiya cities which was mainly involved in rice farming together with vegetables and a few beef cattle. The landowners employed local peasant farmers to carry out the work of growing rice and tending the vegetables for the summer and autumn months but snowfalls of over six metres in winter stopped all work and thus, all earnings.

The peasants living in these mountains had only rice and vegetables to eat during the winter months, as it was not possible to travel to the coast to find fresh fish, they were prisoners in their own homes due to snowfall.

Since those early times in Japan, Magoi have escaped or have been intentionally introduced into the waterways of Japan’s eco-system and are, by far, the largest species of fish to be found there today. The largest (longest) Magoi ever to be recorded in Japan was netted by fishermen in Lake Biwa, (Japan’s ‘inland sea’) in the mid 1980’s and measured exactly two metres. It was later transported to an aquarium centre in Kyushu but could not adjust to the water make-up and sadly died some days later. 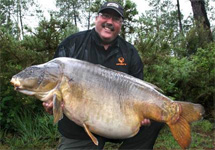 This picture shows a rod-caught, record-breaking ‘carp’ weighing 44 kilos, taken from a lake in France some years ago. One only has to look to see how little this resembles the original true carp. These ‘fish’ have evolved over many years into an entirely different species in order to withstand much colder winter temperatures. Even so, the biggest specimens are still only found in warmer parts of Europe where thousands of dedicated carp anglers make their journeys to fish for them today.

Back to Japan now, Takezawa village office records state that in the late 1780’s, some coloured Carp were produced by local villagers as a private hobby but it was not until the 1820’s to 1850’s that crossbreeding between red and white parent Carp produced ‘Sarasa’ – a white Koi with red spots on the belly. This is said to have been produced in Takezawa village where the monument to the birthplace of ‘Fanciful Carp’ can still be seen today.

Monument to the first coloured carp, this can be seen today in the centre of Takezawa village after it was re-sited in the late 1980’s from the original roadside location between Katsuraya and Mushigame villages. 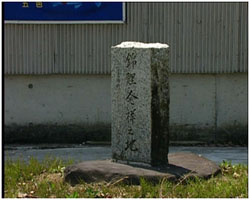 Over the last sixty years or so, many onlookers have built up the myth that Nishikigoi have been a part of Japanese culture and heritage for Centuries. They have been wrongly included alongside true Japanese traditions such as Origami; Japanese Garden Landscaping; Ikebana and Japanese (Samurai) Swords. This has been further enhanced by the oft-quoted reference to a Higoi named ‘Hanako’ and said to have lived to the ripe old (and impossible) age of 278 years after living her life in a spring-fed pond in Japan – more later.

Alas, Nishikigoi are not a part of the traditions of Japan and have only really been seen first hand by the majority of Japanese people living today, since the 1960’s.

At around the early part of the 1900’s the name ‘Nijimura’ was changed to ‘Yamakoshimura’ and coloured Carp began to be produced in greater numbers right up to the outbreak of WW2 where most of the coloured Carp were eaten by the villagers in a time when food was almost impossible to find. Since those early times, Magoi have escaped or have been intentionally introduced into the waterways of Japan’s eco-system and are now, by far, the largest species of fish to be found there. 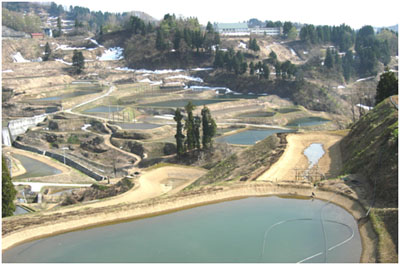 Yamakoshi spring scene showing man-made mud ponds (‘doro-ike’) being filled again after the winter snows. Koi will be introduced to these ponds in mid-June.

The large plastic hoses shown are used for transferring water by siphon from higher ponds to those lower down the mountainsides. 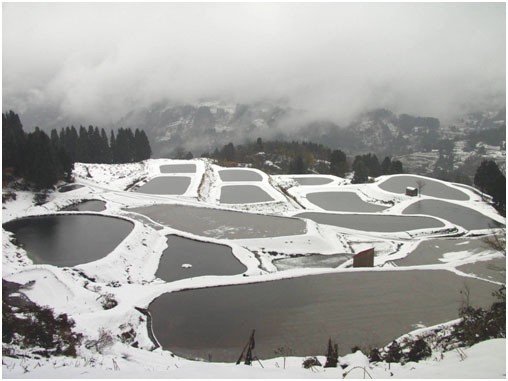 This area in winter, in those times, could have snowfalls of 6 metres deep coupled with summers of intense heat. The original plan was to breed the Magoi males and females in spring and grow the fry throughout the summer months in the warm water reservoirs high in the mountains mentioned earlier. By mid October the fry were around 4” (10cms) long and could be harvested, salted and stored for food. These young carp could then be eaten during the harsh winter period ahead when most villagers were housebound due to the heavy snowfalls and at a time when supplies of animal protein were almost impossible to find.

Parent Magoi were usually kept indoors for winter in earthen ‘ponds’ dug into the floors of dwelling houses. They had to be kept there during the winter to protect them against the freezing outdoor temperatures until they could be used to spawn and produce fry again during the following spring.

(The parent carp originated from different strains of Magoi initially imported from several lines (‘Tetsu Magoi’ and ‘Asagi Magoi’ being the most prominent names given) yet all these varying Magoi strains produced fry that made valuable edible food for the table.)