We drove to this outlet after meeting Kaneko that same night and is only some 2 kilometers away high up in Yomogihira village.

Mr. who was, at the time, producing excellent Sanke from his original ‘Sadazo’ parents, owned this outlet.

After first meeting and greeting each other, Mr. Tanaka wasted no time at all in getting ‘to work’. Within an hour or so I think he had netted and bowled just about every single Koi he had on his premises after first loudly commanding Megumi and Kozaburo to assist him in his efforts!

I bought several of his Koi on that night and mentioned that I wished to return in order to view some other Koi by daylight.

We all ended up inside his home on that cold night where liberal amounts of canned beer and assorted snacks were served by his wife.

My first impressions here were of ‘a very dangerous but expert salesman’ – a gentleman nonetheless.

Sadly, Shoji passed away in late 2008, his son Makoto now runs the far. 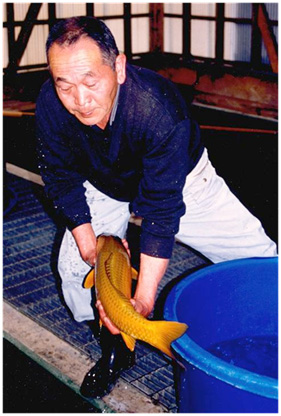 Shoji Tanaka, Marusyo Koi farm, Yomogihira – taken in 2001. The Chagoi was donated to me to give to the BKKS in order to raise funds.