From Mistake to Mystique

No person in Japan ever ‘intentionally’ decided to set out to produce Carp with coloured bodies, in truth it was all a series of mistakes that eventually led to the species of fish we know today as ‘Nishikigoi’ or ‘Koi Carp’.

If we go back to pre-WW2 days in the mountainous areas of Japan’s Niigata Prefecture – (and exactly ‘how far back’ has not really been determined with any real accuracy) – but it certainly was the ruling Samurai classes who owned the vast majority of the land in those very early days.

The mountainous areas to the left of the road that joins Nagaoka to Ojiya cities, then known as Nijimura (20 hamlets) and later to become Yamakoshi was an area where few outsiders ventured.

Only the peasant farmers working for their Samurai landlords eked a meagre living for their families in those territories.

It was then an inhospitable area made up of mountains, rock escarpments and valleys and whilst trees and grasses were abundant, the harsh, deep winter snowfalls put paid to any thoughts of keeping and farming cattle, pigs or sheep.

The only food items, aside from poultry and eggs, that could be produced in this area with any success were rice and vegetables but only in the spring to autumn months.

Whilst it was possible to supplement their vegetable diets in the summer months by way of sea fish that had to be eaten immediately before they rotted.

Alas, Japan’s native species of river and lake fish rarely exceeded 9” long and the majority of these were not easily found in areas such as Yamakoshi.

The peasant farmers concentrated on rice production by carving out flat areas on the mountainsides and forming them into paddies in all manner of shapes and sizes. As the mountainsides continued downwards and into the valley below, the rice paddies also followed this downward path. The intensely warm summer months hardly produced sufficient rain that was vital in order to irrigate and grow the rice and so huge, deep reservoirs were excavated at the very tops of the mountains.

The winter snows filled these reservoirs to the brim after it melted in late April and a series of wooden gates controlled by unreliable wooden ‘monks’ could be lifted when necessary to release the vital waters down into the paddies below.

Now here’s some guesswork on my part but I would doubt very much if any of these peasant farmers had ever heard the word ‘magoi’ in their lives? So how magoi actually arrived in Yamakoshi must either have been by way of ‘those in the know’ – presumably the landlords who had travelled to distant parts or agricultural suppliers in the cities?

Magoi, the black carp, were not indigenous to Japan and thus had to be imported live which must have been almost impossible back then, in view of the fact that transportation was by way of wooden containers (that leaked and had to be constantly topped-up) and the fact that there was no supplementary aeration possible other than by splashing surface water by hand or by pouring from a jug.

However and whatever – magoi eventually found their way into Nijimura for one reason and one reason only and that was to provide fish for the peasant farmers in order to supplement their vegetable diets.

Once again carp were introduced to Nijimura in order to provide food and that’s all.

The peasant farmers who hitherto specialised in rice and other crops, then also had to become food fish farmers something totally alien to their traditional way of life.

Did someone teach them how to produce fish eggs or did they just bumble through it all and eventually come up trumps? I really have no idea – but they did manage to breed their parent stocks and produce some fertilised eggs.

These precious eggs were allowed to hatch in the reservoirs mentioned earlier, they fed on the infusoria and insect life in the water after it had first been enriched with liberal amounts of chicken manure.

Over the hot summer months, the carp fry grew in the reservoirs and by late autumn they needed to be harvested before the winter temperatures set in. At harvest time they varied in size from 2” to 4” maximum and all met the same end by suffering a slow death encased in salt, the only preservative readily available in quantity at the time.

These small salted carp were eaten with relish – eyes, bones, intestines, fins and flesh throughout the winter months and were praised as being a true delicacy and, as experience in carp production increased, so too did methods of keeping parent stocks alive throughout the winter months in order to breed them again the following spring. Excavating ‘ponds’ in the earthen floor of the dwelling houses did much of this after filling them with spring water and then providing aeration throughout winter by hand.

Incidentally, small magoi can still be purchased for food today albeit now sealed in sterile plastic bags and preserved in oil.

Once again, this only revolved around the production of black carp for food but now follows ‘the mistake’.

The mistake was that the magoi farmers had no idea that there were so many different ‘strains’ of magoi, nor were they even remotely concerned just as long as the males and females continued to produce eggs that could be grown.

Mucking around with different strains of magoi resulted in messing up the gene pool although no one knew it at the time and as the interbreeding continued by mistake so too did the gene pool continue to ‘mix’.

Some years later, at harvest time, there were some magoi showing coloured scales and whilst most were eaten as usual, a few people became mystified with these cuties and decided they’d take them home to keep as pets.

And that was the very early but also the very true tale surrounding the birth of Nishikigoi.

Many years later when questions were first raised (far too long after the event) as to where coloured carp came from, many experts opined that it was the mixture of ‘Asagi Magoi’ and ‘Tetsu Magoi’ that was responsible.

Personally, I believe there is a lot of ‘conjecture’ involved here!

Who is still alive today who really knows the truth of it all?

Nothing was documented officially apart from a few short sentences in the records of the Yamakoshi village office.

However, as the years progressed, the humble black magoi was transformed into a very colourful creature that became FAR more valuable to TREASURE than to EAT! 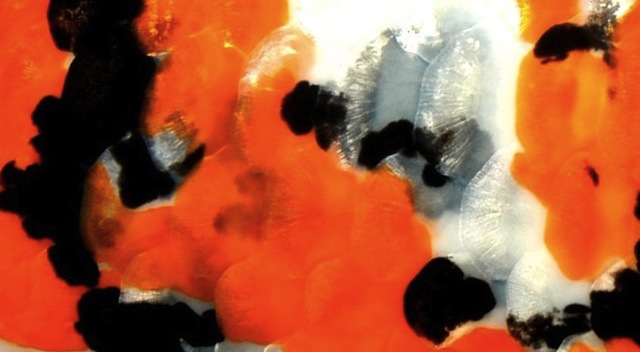 From Mistake to Mystique!